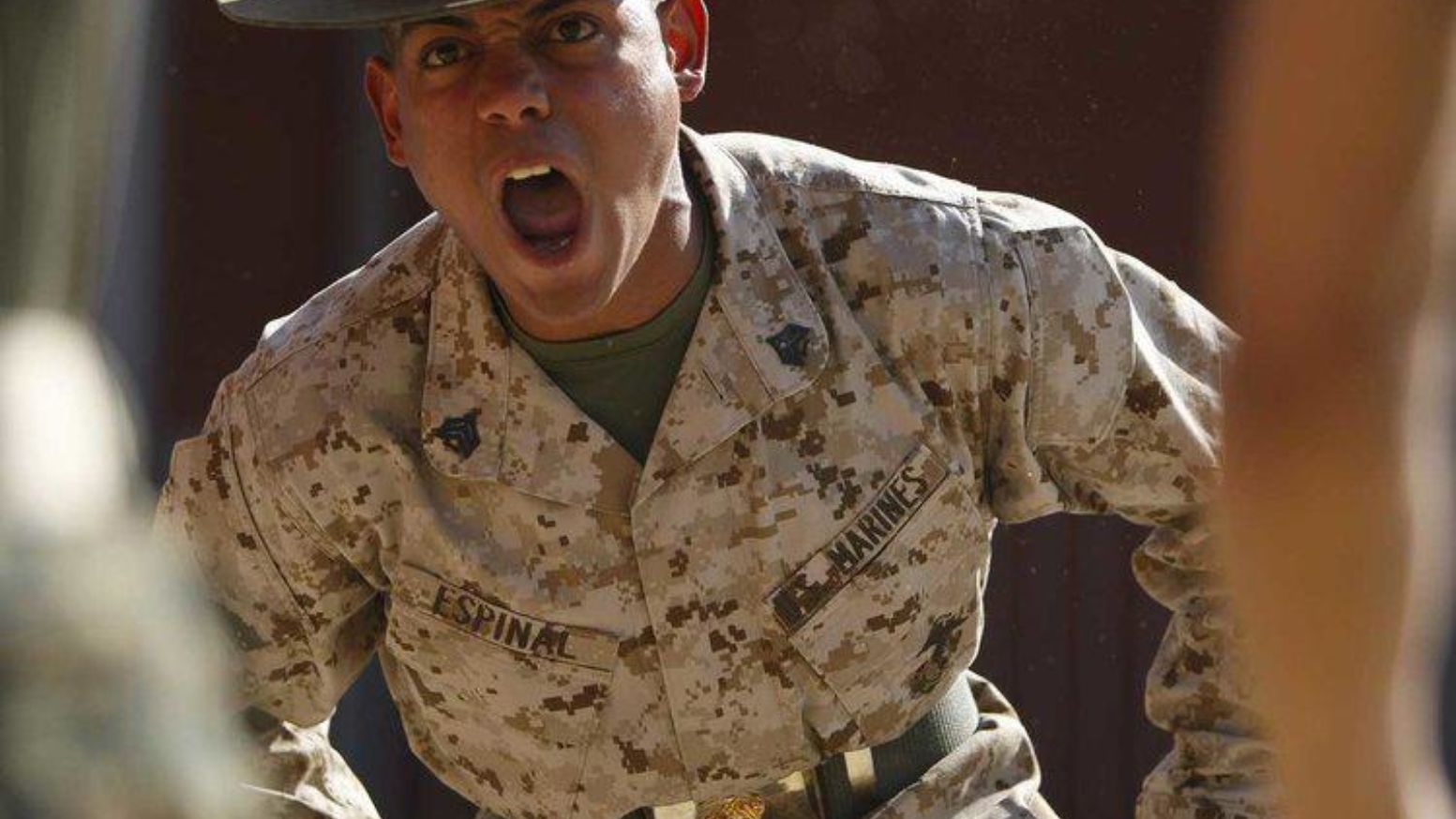 Ccccccccchhhhhhhhhhhh, went the air brakes on the bus as we finally slowed to a stop. As a figure thundered onto the bus, with speed and intensity, the likes of which I had never seen, I began to realize what exactly I had gotten myself into.

The six-foot-three drill instructor before us looked more like a tall stack of bricks than a human. His slacks and shirt were pressed, completely free of wrinkles. On the shirt were two and a half rows of ribbons; on the sleeve, three strips with crossed rifles in the middle. The stern look on his chiseled face would have scared the fur off a grizzly bear. His cold, dark eyes bored into us, a bus full of young, scared high school graduates. He shouted, “Get off my bus right now!”

“AYE SIR!” we responded. I had never moved so fast in my life. Together we booked it to the yellow footprints. However, some recruits weren’t quick enough for the drill instructor.

“GET ON MY BUS RIGHT NOW!” We all moved toward the bus, but forgot one crucial step. “WE DON’T WANT TO SAY AYE SIR, EH? GET ON MY YELLOW FOOTPRINTS RIGHT NOW!” Shouted the Drill Instructor.

Back and forth we moved, from the bus to the yellow footprints. We got the message: anything and everything the instructor said demanded a response. No wonder they don’t show this in the commercials, I thought to myself. If they did, no one would join. I realized then, it was going to be a long, tough, three months.

I don’t remember much of that first night, but the yellow footprints remain vivid in my memory. I always asked myself, why was this particular tradition important? Why not just line people up without them? Little did we know that hot, muggy night that those footprints meant something. They represented a long history of men and women who stood where we stood and felt what we felt. They were just as scared, yet just as driven; nervous, but ready to be challenged; anxious, yet hoping to be called among the few, the proud, the Marines.

In retrospect, boot camp was one of the toughest things I’ve ever done in my life. I don’t regret any of it because without it I wouldn’t be able to write this book or be alive. See, here is the thing about boot camp, in the moment it is challenging but it gives every Marine, no matter what they go on to do in the Marine Corps, the foundation to be an effective fighter. Even the guys who go and play in the Marine Corps band can hit any target from 500 yards. Basic training Is the essential building block for every Marine.

Basic training is also an essential part of Christianity. When I think about the current status of the Church, I’m worried. I cannot help but think a vast majority of parents, kids, and church leaders are woefully unprepared for the battle that takes place beyond the confines of the Church building. Look at any statistic and the truth is in the numbers: there are a lot of young people disengaging and leaving the Church. One of the main reasons is they’re in a battle they’ve not been prepared for; they’re operating without having the basic training in defending the Christian faith. This would be the equivalent of someone signing up for the Marine Corps, bypassing basic training and being dropped into combat during WWII, Vietnam, Iraq or Afghanistan. What would he survivability rate be? Low. A Marine who can’t defend himself, can defend help defend others; the same is true for Christians.

So how can you become a better defender of the faith? Here are three things you can do today:

By taking these steps, you may be “the few, the proud, the apologists” but you are instrumental in the defense of the Gospel.