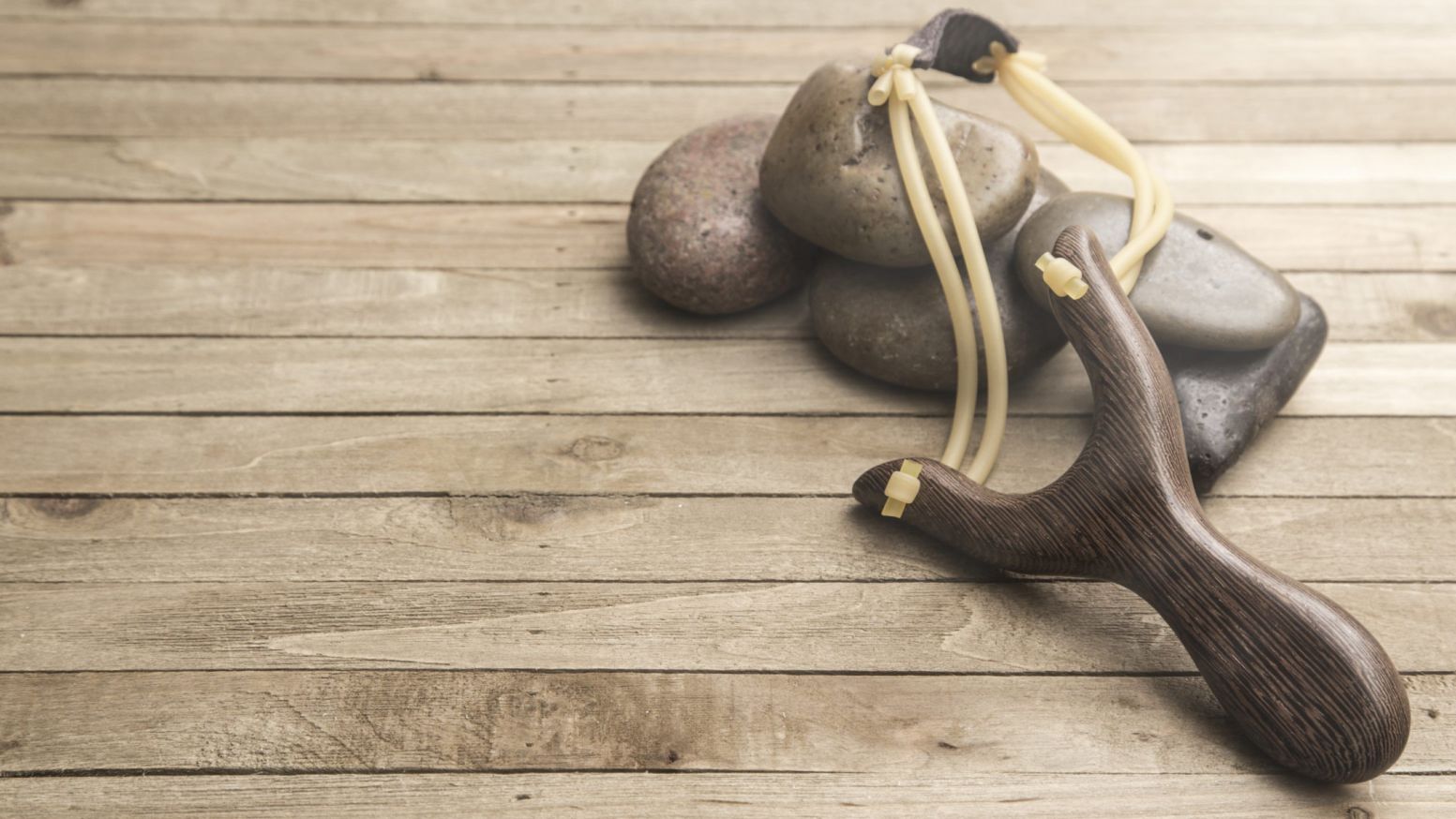 Movies, documentaries, and television programs regularly depict David as a little boy who kills Goliath with a slingshot. Scholars often follow a similar path, describing David’s battle with Goliath as the stuff of legend. In his monumental biography of David, accomplished biblical scholar Baruch Halpern describes him as a “mere youth” and “delicate little amateur.” Alexander Rofé claims that David was a “lowly youth who makes an ideal fairy-tale hero.” So, how did this little boy kill Goliath? And how did he do it with such a simple weapon?

The problem here is that false depictions of David have become such a part of our culture that we often believe them to be an accurate portrayal of the biblical account. Most people see David as a child when he fought Goliath, mostly based on Saul’s description of him as a “youth” (1 Samuel 17:33). What most may not realize is that this is a somewhat inaccurate translation that contradicts other descriptions of David in the same chapter.

Before David fights Goliath, one of Saul’s aides describes him as a “man of valor” and a “man of war” (1 Samuel 16:18). The words used to describe David here are gibbor and ish, respectively. A gibbor was a “mighty man”—the same word used of David’s elite warriors in 2 Samuel 23 who are responsible for incredible acts of bravery and military prowess. This term appears over 150 times in the Hebrew Bible and describes military heroes or champions. The other word, ish, refers to an adult male. Neither describes a little boy.

A second detail often missed by readers is found at the end of 1 Samuel 16. Here the author states that David enters Saul’s service as an armor-bearer (v. 21). In the Bible, these individuals were capable warriors (1 Samuel 14:1-5) who fought on the battlefield (1 Samuel 31:4-5). The author describes David as a soldier before his encounter with Goliath.

This brings us to Saul’s description of David as a “youth.” This is understandable, given the fact that Saul is older and has sons that seem to be around David’s age. Further, even though David is already a warrior, there are doubtless more accomplished soldiers in the Israelite army. Saul’s language is part of his attempt to dissuade David from accepting Goliath’s challenge, perhaps because he sees David as something other than the best option available.

But what of the description of David as a “youth”? Here we have to dig into the text itself. Saul uses the term na`ar, which is often translated as “youth,” “lad,” or “boy.” In military contexts in the Hebrew Bible, however, the term points to an adult male warrior. This is how the term is used in extrabiblical literature as well. In his account of his battle with Hittite forces at Kadesh in 1274 BC, pharaoh Ramesses II states that a contingent of warriors called ne`arin (Hebrew plural, na`arim) saved the Egyptian army from certain defeat. The term also appears in Ugaritic texts as a word describing professional soldiers.

If we interpret David’s description properly, we see that he is a young soldier of military age (at least 20, cf. Numbers 1:3, 45; 26:2), not a little shepherd boy. While he does tend his father’s sheep, this kind of thing occurred in an agriculturally-driven economy. For instance, Doeg the Edomite was Saul’s chief herdsman but also an executioner (1 Samuel 22:18-19). Later, in the Roman Republic, men would be called away from their farms to serve as soldiers, then return home to their lives as farmers after their military obligations concluded.

Even if David was an accomplished fighter, how did he kill Goliath? David’s weapon was not a slingshot but a sling. The sling was an incredibly accurate military weapon with devastating power (cf. 2 Kings 3:25; 2 Chronicles 12:2). The Assyrians used groups of slingers in war, as did the Israelites (Judges 20:15-16). A sling stone was about the size of a baseball, weighed over a pound, and could be thrown at speeds over 60 miles per hour. Far from a pebble fired from a child’s toy, a sling stone was an especially lethal weapon. The Roman writer Vegetius wrote that sling stones were more dangerous than arrows and could kill a man with blunt force trauma (Epitoma Rei Militaris 1.16).

If we take all the evidence into account and interpret the biblical text accurately, we see that David is a young soldier who has at least some experience. There are more accomplished warriors in Saul’s service, but David’s skill with a sling enables him to catch Goliath by surprise. David’s choice to use a sling is a brilliant move as Goliath had no missile weapons (based on Egyptian depictions of Philistine warriors, his “javelin” was probably a second sword; 2 Samuel 17:6). With no armor, David could strike at a distance and easily evade an opponent weighed down by a massive amount of equipment (vv. 5-7). David’s decision to use a sling and wear no armor was a genius tactical decision.

So how did little boy David kill Goliath with a slingshot? He didn’t. By reading the story as the biblical author intended, we can see that David is not a little shepherd boy who fells an enemy warrior with a child’s toy. He is a capable and intelligent young soldier who surprises his opponent through his unconventional choice of weapons. To describe David as an amateur or fairy tale hero in this story is not only poor scholarship; it borders on the obtuse.

Footnotes
While You're Here
If you found this blog beneficial, consider donating to The Daily Apologist.
Donate Today
Subscribe to our Newsletter