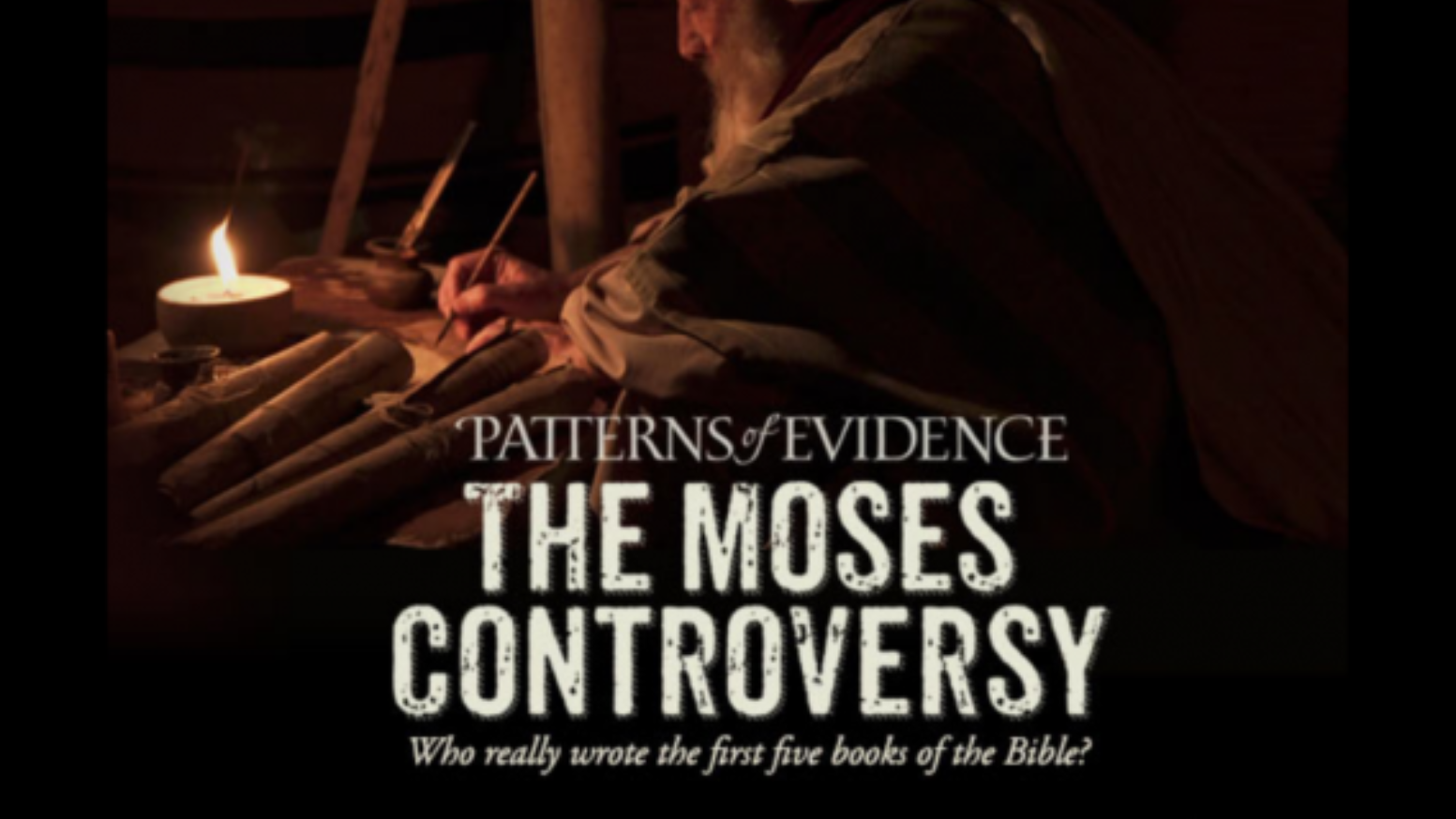 The Moses Controversy is the second installment in a series of films called Patterns of Evidence. Filmmaker Tim Mahoney explores the issues surrounding the Mosaic authorship of the first five books of the Bible. The biblical writers themselves attribute Mosaic authorship to these books. Mainstream scholars don’t agree, as the film makes clear.

During the film, Mahoney interviews several scholars who deny the Mosaic authorship of the Pentateuch (archaeologist William Dever, Egyptologists Donald Redford and Orly Goldwasser, and theologian Douglas Knight). He interviews other scholars who are just as convinced that Moses did write it (archaeologist Randall Price, Old Testament scholars Peter Gentry, Duane Garrett, and Douglas Petrovich). He also interviews Christopher Rollston, an award-winning expert in Northwest Semitic languages, who seems to fall somewhere in-between.

Mahoney does point out something important: the critical scholars he interviews from Canada and the US all were raised in Bible-believing homes that could be described as “fundamentalist.” After finishing graduate school, they became unbelievers. It is no secret that institutions of higher learning often have an anti-biblical bias (especially in the sciences, where some have advocated rescinding the degrees—even PhDs—of those later discovered to be Bible-believers). One of the scholars interviewed (Peter Gentry, if I remember correctly) tells the story of asking his professor about a book written by the famed Jewish Italian scholar Umberto Cassuto. Gentry’s professor simply responded, “We don’t read things like that here.” When it appeared, this book was a withering broadside against the documentary hypothesis (the JEDP theory) and is still one worth reading today.

Mahoney rightly exposes the problems with critical scholarship but is undiscriminating when the evidence fits his theory. This can be seen in his use of the work of David Rohl, whose “revised chronology” is the basis for the previous film and makes an appearance in The Moses Controversy. I cannot overstate the importance of the fact that no legitimate scholar in the world agrees with Rohl’s theory. At least, none that I can find. Established experts—whether radical critics, biblical inerrantists, or anyone else in-between—have noted that Rohl is rightly challenging some assumptions that historians make, but his conclusions are simply untenable in the final analysis.

Unfortunately, the same can be said for Mahoney’s use of Doug Petrovich in the film. Petrovich’s book The World’s Oldest Alphabet: Hebrew as the Language of the Proto-Consonantal Script claims that inscriptions found in the Sinai Peninsula are not just Semitic (as virtually all scholars agree), but are uniquely Hebrew (which everyone else denies). The problem here, glossed over in the movie, is that the engraved words are Semitic, but it is impossible to identify them as specifically Hebrew—which is essential to the case Mahoney is making in the film. To quote Rollston, it would be great if it were true. Unfortunately, it isn’t. Biblical scholar Alan Millard—who has spent a fair amount of his career defending the veracity of the Bible—reviewed Petrovich’s book and found it lacking. )For anyone interested, the April 2017 review of the book on the ASOR website). Rollston also examined Petrovich’s work on his blog in 2016 and exposed numerous problems with the interpretations of the inscriptions included in The Moses Controversy.

Two of the primary sources of Mahoney’s information are not only questionable but highly suspect. This is where I found the film disappointing. There is a lot of good work being done by archaeologists and Egyptologists with a bearing on the issues raised by The Moses Controversy. Unfortunately, by committing himself to Rohl’s views, Mahoney undermines his case and excludes information that could be used to support the traditional chronology we see in accepted scholarship. Essentially, Mahoney has gambled everything on fringe views that will almost certainly become more unworkable as scholarship progresses.

This brings up another, more troubling problem. For some Christians, any evidence that supposedly supports the Bible is good enough. This is why pseudo-archaeologists who claim to have found the ark of the covenant in Jerusalem or chariot wheels at the bottom of the Red Sea will always have a die-hard following. It is also the reason why some Christians will continue to believe that NASA found evidence of Joshua’s long day. A cursory look at the information handily disproves all of these beliefs. Christians should not accept anything but the best evidence that can withstand intense scrutiny.

I admire Maloney’s drive to explore the evidence supporting the veracity of the Bible. That he is an incredibly skilled filmmaker is obvious. His work is top-quality. Unfortunately, the substance of his two films is greatly lacking. He has chosen to use theories that have not won any support from the academic community. This undermines the credibility of his work significantly, even though some of it is valuable. Overall, The Moses Controversy is an interesting film even if it’s arguments hold only a little water.